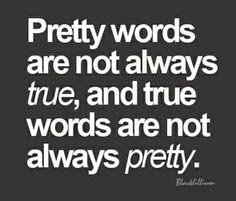 Saying it is one thing; meaning it is another.

Mean what you say, and say what you mean, but don’t say it mean.

It’s important that people know that what you are saying is the truth.  We don’t have to say everything we’re thinking, but what we do say should be accurate.

We need to be clear, direct and respectful of others when speaking, if we don’t want to appear to being mean.  Aggressive people tend to be very honest but express this honesty in an inappropriate way  Others come across as being judgmental.

Miscommunication is the root of most conflict.  And the best way to show that you mean what you say is to do what you say you’re going to do.  It’s very disappointing when we find out someone doesn’t mean what they say.

Trust comes from communicating the truth without deception, denial or exaggerations.  Trust means what you say is what you do

Always keep your words kind and truthful. It's the best way to earn trust.

We always say "say what you mean and mean what you say"...many parents there days forget this golden rule! HA!

Good reminder! I've always tried to be sensitive to my tone of voice, but relapsed last night. Fortunately, I took hold of my senses and apologized … but I'm still disappointed in myself.

So true that we don't always have to say everything we are thinking, but we do have to be careful with the words that we say to make sure they are accurate and uplifting, not tearing people down. We want our words to do good, not to do harm.

Words can cut as deep as swords!