Remember God's bounty in the year. String the pearls of His favor. Hide the dark parts, except so far as they are breaking out in light! Give this one day to thanks, to joy, to gratitude! 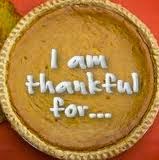 Today I’m thankful for a day to celebrate Thanksgiving

Thanksgiving Day is a jewel, to set in the hearts of honest men; but be careful that you do not take the day, and leave out the gratitude.

It’s a day to bend the knee and give thanks for all we’ve been given.

We have this one day of the year set apart from all the others for the soul purpose of giving thanks and that is why I’m sharing a little of our Thanksgiving history with you all today.

Thanksgiving Day can be traced back to the 1621 celebration at the Plymouth Plantation, where the religious refugees from England known popularly as the Pilgrims invited the local Native Americans to a harvest feast after a particularly successful growing season. 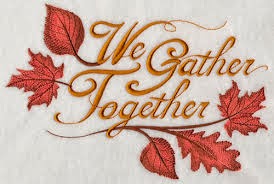 Thanksgiving Day comes, by statute, once a year; to the honest man it comes as frequently as the heart of gratitude will allow.

In 1863 at the height of the Civil War President Lincoln supported legislation which established a national holiday of Thanksgiving.  The day was set in stone by President Franklin D. Roosevelt in 1939 and approved by Congress in 1941, designating Thanksgiving as last Thursday in November, because there are sometimes five Thursdays in the month 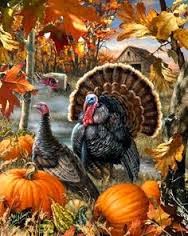 Dear Lord; we beg but one boon more:
Peace in the hearts of all men living,
peace in the whole world this Thanksgiving.
Joseph Ausländer

Another Thanksgiving tradition is the Macy's parade in New York City which is an annual pageant of floats, marching bands and gigantic balloons.

The parade dates back to the 1920s when many of the immigrant workers at Macy's department store were keen to celebrate the American holiday with the sort of festival their parents had thrown in Europe. Macy’s gave the children of New York a particularly special Thanksgiving treat! 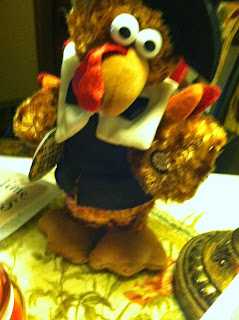 Ah! on Thanksgiving day....
When the care wearied man seeks his mother once more,
And the worn matron smiles where the girl smiled before.
What moistens the lips and what brightens the eye?
What calls back the past, like the rich pumpkin pie?
John Greenleaf Whittier

Although Thanksgiving Day always ends, our expressions of gratitude to God should continue throughout our daily lives.

Always remember that : People with a cheerful heart have Thanksgiving 365 days a year. From my house to yours, I hope you all have a safe and Happy Thanksgiving !

HAPPY THANKSGIVING to you and your family. ENJOY!

Watching the parade this morning, always fun to do. Happy Thanksgiving! So much tobe thankful for!

Right back at you after reading a sweet Thankgiving Blog entry......HAPPY THANKSGIVING..
We are thankful for life, health and Him!

From our home to yours ... Wishing you and your family abundant blessings!

Happy Thanksgiving. I hope it's been a remarkable day.
R