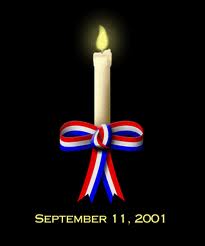 
As the soot and dirt and ash rained down,
We became one color.

As we carried each other down the stairs
of the burning building,
We became one class.

As we lit candles of waiting and hope,
We became one generation.

As the firefighters and police officers
fought their way into the inferno,
We became one gender.

As we fell to our knees in prayer for strength,
We became one faith.

As we whispered or shouted words
of encouragement,
We spoke one language.

As we gave our blood in lines a mile long,
We became one body.

As we mourned together the great loss,
We became one family.

As we cried tears of grief and loss,
We became one soul.

As we retell with pride the sacrifice of heroes,
We become one people.

We are the Power of One
We are United
We are America.

September 11th - love makes us ONE

9/11 is a date that stands out in my memory, one that I’ll never forget.  It’s a day to pay tribute to those that lost their lives and to honor all those that worked so diligently to help others.  Brave citizens, firemen, policemen, paramedics and doctors and nurses.

In my lifetime, there is probably no other time that I felt as proud to be an American as I was that day.  I felt a bond with all those in our country.  A unity that touched my soul.

It would be good for us all to remember that we are one people.


There is a destiny that makes us Brothers,
No one goes his way alone;
All that we send into the hearts of others,
Comes back into our own.

That was a good poem to pretty much wrap up how we all felt that day 14 years ago. Definitely one we should never forget and definitely we should always be grateful for first responders who go in to help others at sometimes the ultimate cost of their own lives.

Remembering... Another day that will live in Infamy. :-(

"The Power of One" ... my goodness, that was magnificent in it's simplicity.
Sometimes that day seems like it just happened - the gamut of my own emotions running this way and that.
I find it comforting that we've all shared history and lean on one another's memories. I wonder if my own parents felt that way when they spoke of Pearl Harbor.

Nell and I had been in DALTON GEORGIA SHOPPING of course and co that day and coming back to Calhoun FLAGS were up everywhere and not much traffic on the road ~~~ we knew something terrible had happened ~~~ I CRYED ALL THAT NIGHT and will never forget that at any time or on any day ~~~ TERRIBLE THINGS CAN HAPPEN --- we ahould be living right and praying for our PRESCIOUS AMERICA EVERY DAY ~~~ GOD BLESS AMERICA!!!!!!! and give us a REAL AMERICAN for our PRESIDENT this time and let's put the American flag UP as a symbol that we LOVE OUR COUNTRY! ~~~ and let us REMEMBER THAT PRAYER CHANGES THINGS!!!!!!