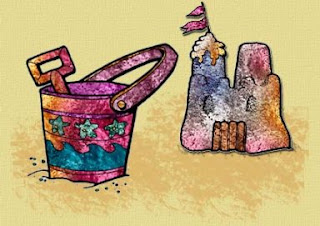 I think that inside every adult is the heart of a child. We just gradually convince ourselves that we have to act more like adults. 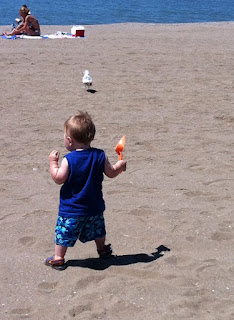 A little boy is on his knees scooping and packing the sand with plastic shovels into a bright blue bucket. Then he upends the bucket on the surface and lifts it. And, to the delight of the little architect, a castle tower is created.

All afternoon he will work. Spooning out the moat. Packing the walls. Bottle tops will be sentries. Popsicle sticks will be bridges. A sandcastle will be built.

A man is in his office. At his desk he shuffles papers into stacks and delegates assignments. He cradles the phone on his shoulder and punches the keyboard with his fingers. Numbers are juggled and contracts are signed and much to the delight of the man, a profit is made.

All his life he will work. Formulating the plans. Forecasting the future. Annuities will be sentries. Capital gains will be bridges. An empire will be built.

Two builders of two castles. They have much in common. They shape granules into grandeurs. They see nothing and make something. They are diligent and determined. And for both the tide will rise and the end will come.

Yet that is where the similarities cease. For the boy sees the end while the man ignores it. Watch the boy as the dusk approaches.

As the waves near, the wise child jumps to his feet and begins to clap. There is no sorrow. No fear. No regret. He knew this would happen. He is not surprised. And when the great breaker crashes into his castle and his masterpiece is sucked into the sea, he smiles. He smiles, picks up his tools, takes his father's hand, and goes home.

The grownup, however, is not so wise. As the wave of years collapses on his castle he is terrified. He hovers over the sandy monument to protect it. He blocks the waves from the walls he has made. Salt-water soaked and shivering he snarls at the incoming tide.

It's my castle, he defies.

The ocean need not respond. Both know to whom the sand belongs... 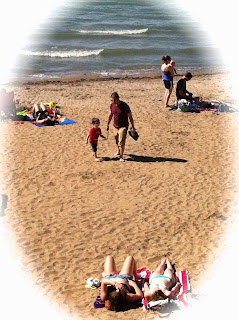 I don't know much about sandcastles. But children do. Watch them and learn. Go ahead and build, but build with a child's heart. When the sun sets and the tides take - applaud. Salute the process of life and go home.

Life gets more complex as we grow and many childlike attitudes and activities have to be relinquished, but not all of them.  Many adults could be a lot happier if we engaged more often in the traits which children are blissfully unaware they've mastered. 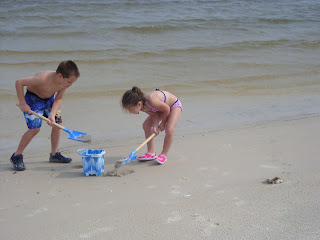 You can be childlike without being childish. A child always wants to have fun. Ask yourself, 'Am I having fun?'

WOW what a comparison for life, and a lesson we all should learn, and hold close with our other truths.
Nice day here in the Carolinas, we need the rain, they say we are headed into drought conditions. but we do have a beautiful day predicted.

Did enjoy the philosophy in the castles built by the boy and by the man. So true for us to look at childlike wonder of some things in life and dwell on that rather than sometimes the negatives of life that can bring us down.

What a touching story. Loved it. sandcastles can teach you alot.