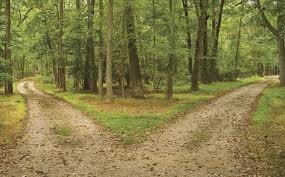 Of all the paths you take in life,
make sure a few of them are dirt.

I’ve been blessed to have traveled a few dirt roads in my life and when I saw this quote it brought to mind an article  by Paul Harvey about Dirt Roads.  I’m sure you’ve probably seen it before but I thought it worth sharing today.

What's mainly wrong with society today is that too many Dirt Roads have been paved.

There's not a problem in America today, crime, drugs, education, divorce, delinquency that wouldn't be remedied, if we just had more Dirt Roads, because Dirt Roads give character.

People that live at the end of Dirt Roads learn early on that life is a bumpy ride.

That it can jar you right down to your teeth sometimes, but it's worth it, if at the end is home...a loving spouse, happy kids and a dog.

We wouldn't have near the trouble with our educational system if our kids got their exercise walking a Dirt Road with other kids, from whom they learn how to get along.

There was less crime in our streets before they were paved.

Criminals didn't walk two dusty miles to rob or rape, if they knew they'd be welcomed by 5 barking dogs and a double barrel shotgun.

And there were no drive by shootings.

Our values were better when our roads were worse!
People did not worship their cars more than their kids, and motorists were more courteous, they didn't tailgate by riding the bumper or the guy in front would choke you with dust & bust your windshield with rocks.

Dirt Roads were environmentally friendly, you didn't hop in your car for a quart of milk you walked to the barn for your milk.

For your mail, you walked to the mail box.

What if it rained and the Dirt Road got washed out? That was the best part, then you stayed home and had some family time, roasted marshmallows and popped popcorn and pony rode on Daddy's shoulders and learned how to make prettier quilts than anybody.

At the end of Dirt Roads, you soon learned that bad words tasted like soap.

Most paved roads lead to trouble, Dirt Roads more likely lead to a fishing creek or a swimming hole.

At the end of a Dirt Road, the only time we even locked our car was in August, because if we didn't some neighbor would fill it with too much zucchini.

At the end of a Dirt Road, there was always extra springtime income, from when city dudes would get stuck, you'd have to hitch up a team and pull them out.

Usually you got a dollar...always you got a new friend...at the end of a Dirt Road!

Those dirt roads that I traveled have now been paved, but I’ll never forget the folks that lived there and have some wonderful memories of what life was like when you traveled a dirt road.

Paul Harvey had so much wit and insight. Somehow waiting for his commentary was a good wait, I was NEVER disappointed as his ability to tell a truth and keep you spell bound.
I have never read this one. THANKS

Muir, a great outdoorsman...VERY GOOD. Today we are on a day trip to visit one of our college kids.

This was great to read about dirt roads; so true about the happenings on them that we don't appreciate now with the paved roads we more than often drive on.

I loved Paul Harvey, but never heard this one. GREAT man, and GREAT observations!

I adored Paul Harvey and his life lessons. This piece on Dirt Roads was very good.