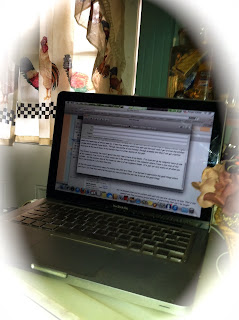 But he who kisses the joy as it flies
Lives in eternity's sun rise.

I often bemoan the fact that where I live I don't actually see the sun rise here in the morning.  It appears after it goes above the housetops of others near by.  I have few windows which face east and the best view I get is from the kitchen window which actually faces south.  Through the months of mid October through probably late May I can get a better view here as the sun is lower in the horizon than it is other months of the year.

The kitchen is probably the room I spend the most time in here at my house.  I've even set up my computer here on one of the counters. I've tried it in other rooms, but I like sitting here at the computer where I have a nice view of the outside.   On the western side of the house my view is of my neighbors house.  It's just not very scenic at all when you live in the middle of a city block like mine.

So like the quote shown above says, I'm kissing the JOY as it flies.  I've learned to appreciate the good things where and when I can find them and starting each new day watching the sun rise is one of the good things.

It is a fact, we search for views and beauty as humans, it is too bad that it seems some folk NEVER find the beauty around them.

I do see beautiful trees - lol.

We too don't have a few of the sun rising from any windows here, son setting we do. I know the last few houses we've lived in, I've set up my work place by a window so I can look out and enjoy the birds, etc :)

Sounds like you found the perfect spot for you and your computer. ENJOY!