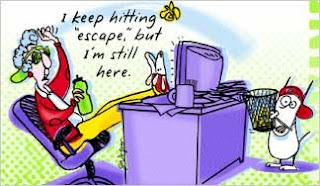 We feel free when we escape - even if it be but from the frying pan into the fire.

Very often the highways that run through the Appalachian Mountains feature a series of runaway truck ramps. This steep descent combined with the road’s winding path can create problems for motorists, especially truck drivers. So a runaway truck needs an escape route from a highway.

There are times that we also need a way of escape when out of control situations threaten our physical and mental well being.

I remember when my children were little and got out of control, they were put in time out.  Time outs are great for children and adults.  They give us an escape ramp.  Taking some time out from what ever situation you might find yourself in, does help.  Just to step away from a tricky situation for a moment or two gives you time to take a deep breath and calm down.

I'm reminded of a joke a read about playpens…you know the things we used to keep our little ones in.  They don't make them anymore…now we have something similar called a pack and play but it is much smaller than the old fashioned playpens we used to have…

HOW TO KEEP YOUR SANITY

Mary was almost crazy with her three kids.

She complained to her best friend, They're driving me nuts. Such pests, they give me no rest and I'm half-way to the nut hatch.

What you need is a playpen to separate the kids from yourself, her friend said.

So Mary bought a playpen.

A few days later, her friend called to ask how things were going.

Super! I can't believe it, Mary said. I get in that playpen with a good book and the kids don't bother me one bit!

No matter what you want to call it, an escape, a time out or even a play pen, we all need to have some way to keep our mental and physical well being intact.  For me it is often a simple prayer saying,  Dear Lord, things are out of my control, but I do know that You are always in control.  I turn the impossible over to YOU, the One who can make anything possible.

It comes down to whether you believe in seven miraculous escapes a week or one guardian angel.

Being honest I have wanted to escape so many many times in my life - never have - but in exchange I guess I am stronger - but do I need to be that strong?

I remember playpens well. Still chuckling about the lady who escaped in one with her book. I understand the feeling.

I remember having TIME OUT with my children``and when I get stressd sometimes, I have a TIME OUT for ( me )~~~ we do have our ways to COPE ~~ (smile) Jean(Rome Ga girl living in Calhoun HAPPY LABOR DAY!