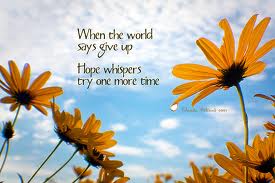 Michael was the only survivor of the shipwreck. He was washed up on a small, uninhabited island. He prayed feverishly for God to rescue him. Every day for two months he scanned the horizon for help, but to no avail. Exhausted, he eventually managed to build a little hut out of driftwood to protect himself from the elements and to store his few possessions. One day, after scavenging for food, he arrived home to find his little hut in flames with smoke rolling up to the sky. The worst had happened! Everything was lost! He was stunned with disbelief, grief, and anger. God, how could you do this to me? he cried. Early the next day he was awakened by the sound of a ship that was approaching the island. It had come to rescue him. How did you know I was here? asked the weary man of his rescuers. We saw your smoke signal, they replied. We may at times feel that God has abandoned us. It is during those moments that God is in fact nearer than we think.

He who has faith has... an inward reservoir of courage, hope, confidence, calmness, and assuring trust that all will come out well - even though to the world it may appear to come out most badly.

Just as the man in the shipwreck was rescued, sometimes we need to  be rescued from the daily stresses of life.  We need some relief from the hustle and bustle of every day tasks.  Taking a break, an day off or even a week is always a good thing.

Since I retired, I have had days on end without any stress at all.  It seems like a permanent vacation here but I do remember how relieved I used to be when a vacation day would finally showed up.

Very often we don't know the reason why certain things happen, but I believe every thing has a purpose.  So even though we might ask WHY? it is easier to accept when we know that there is a master plan and all works together for the good.

We can all make plans for things we want to do or have, but that is not always the way things turn out.  Being able to accept that fact and move on is a blessing.

Today is a good day to take a vacation from worries, to be content.

Weave in faith and God will find the thread.

Thank you for this wonderful post this morning. I needed the reminder. Blessings

I agree being able to accept what is, instead of what isn't makes life more stress free.

It's a long road but it can and must be done. sandie

Your comments today are right on. YOu can have days with no stress, and life becomes BLESSED with the peace. Lov the story and your comments even top it.
(HUGS) from UTah