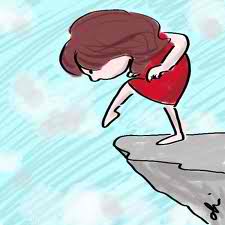 I've learned that you cannot make someone love you. All you can do is be someone who can be loved. The rest is up to them.

To expose to a chance of loss or damage; hazard.

If you don't try, you'll never know. Sometimes we need to take a risk... making a leap of faith and giving it another go

We cannot expect to reach our goals without taking a risk every now and then, putting out into the unknown and seeing what comes our way. And if things don't go your way the first time? Try again!

So, so true. I'm spending the day with friends at a condolence call. Definitely will go over happy memories. Wishing you a sweet Sunday!

I like that essay of things that the author had learned. I think I've learned a few of those things over the years myself.

I'm not much of a risk taker, but I do agree sometimes we need to take risks in our lives :)

Another wonderful post. I've always enjoyed talking with others, finding out what they think life has taught them. Writing it out is a good thing. sometimes we don't realize what we have learned till we see it written down on paper. Have an awesome Sunday. It will be a better day for me because it is sunny. finally!

So very true. Every word.

Yes, I love the list becasue it fits the general public. Most of us have learned what was listed and it is good to be reminded.
It reminds me of your word of course, RISK, putting ourselves out front on a decision is a big mental RISK!

I am going to make a copy of that poem - it is a good one! And so true. Thanks for sharing the poem.
sandie

"I've learned that you can do something in an instant that will give you heartache for life." Everything you said is true. But this line hits home.