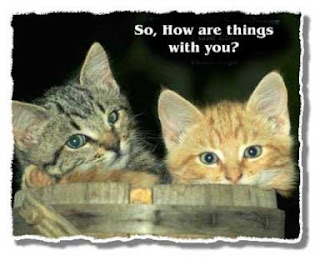 Delays, disappointments and defeats cause quitters to give up in resignation: losers, to give in to the frustrations:  winners, to come through with determination.
William Arthur Ward
SUPER SATURDAY/ FINISH WHAT YOU START
In one of Garfield's cartoons he is shown resting droopy eyed in his bed thinking to himself:  One of my pet peeves, he says to himself, is people who never finish what they start.  As he cracks a knowing smile, he says, I do not happen to be one of those people.  The last frame of the cartoon shows him under the bed covers saying,  My philosophy is, Never Start Anything.
If you've ever begun a task and never finished it, you are not alone.  We've all lost interest in things.  It's normal, but if you are finding that there is more unfinished than finished then there is probably a reason for it.
There have been many times I've stopped doing something because I wasn't getting the results I wanted so I put it away for another day when I might be feeling a bit more creative.
Then there are times when I become so distracted by something else, that the project I was working on became very insignificant so I had to walk away and give my attention to whatever else was happening.
Other times I've started something because I thought it was important at the time and then later realized it was the last thing I should have become involved in.  There were just too many really important things to do that if and when I had the time this would be the very last thing I'd want to do.
I think we all have the problem of having too many irons in the fire at one time.  It's important to prioritize and do what needs our attention the most.  I used to do this when things got busy at work and I find that I still have to do it at home too.
Too many tasks and not enough time causes a lot of frustration.  Frustration causes all sorts of things like anger and depression.  My goal today is to finish the most important thing on my to do list and leave frustration behind.
The wonderful thing is that we get to choose what we do and for me that makes for a SUPER Saturday.  Today I'm very thankful for being able to choose what I want to do. I won't become dissatisfied with what I've failed to do, but will rejoice in the fact that at least for today, something was accomplished.
I hope your day is a SUPER one that is filled with the sense of accomplishment.
'On Ya'-ma
Posted by I'm mostly known as 'MA' at Saturday, November 12, 2011

I find sometimes I'll take too much on or something I'm not really suited to do but want to do because I think I should do it. For example, baking or a craft project. I thought in years past because my mom/sister were good with them that I should try to be too, but I just didn't have the heart or talent so I would have a lot of unfinished craft projects. Over the years I learned to really evaluate "do I want to do this" and my motives for doing so, so less unfinished things!

I'm doing the most important things which at the moment is coffee & computer! LOL I got a lot accomplished yesterday...so I'm thinking I'm taking today off! LOL

I hope you have a wonderful day!

One can for sure, get too many Irons in the fire. YOu are right about the priorities, if you don't set them something will bite you.

Take care.
Sherry & Jack
PS: I thought waxing the motor home was gonna be one of those 'neverfinished' but it finally did get done.
Take care, we are in the70's today but it actually go down to the 40's last night!

I was never a procrastinator. I try real hard to get the important things out of the way first and foremost.

Too many irons in the fire frustrates me. Have to learn to cope better. Our trip to visit my parents got delayed because my husband is sick. Now I've resigned myself to the fact I might not see them until spring because of that and snow in the mountains. Makes me sad. Take care.

I've done a good lot of blog visits and have been able to catch up with friends. It's my favorite accomplishment of the day!