It's a Wonderful Wednesday

Angels from the realms of glory

Saints before the altar bending,
Watching long in hope and fear, 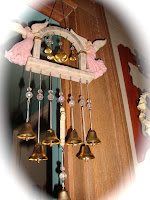 This is the time of the year when there are angels and calls for angels all around. Angels' in Greek mean Messengers. In the Bible, heavenly angels are mentioned as messengers of God. Christmas angels are perhaps the most popular form of angels that are used in our celebrations.
Angels were the ones that brought us the news of the birth of the Christ child. Gabriel, the heavenly Christmas angel brought the divine news to Mary and revealed that she was chosen to bear God's son. Another angel informed Joseph that he should marry Mary and look after the Christ.
According to a legend, God appointed a small group of tiny angels, who were just learning their angel ways, to watch over Joseph and Mary on their journey to Bethlehem. Tiny angels did all they could and tried to do their best but could not help the couple to find shelter in the inn in the over-crowded town. Finally, they had to make do with the inn's stable.
They were so excited that they were to witness the birth of God's Only Son that flew closer to earth and sang sweetly. The fastest among them caught sight of the newborn child from stable's roof and instantly understood their mission was to herald the birth. They were so filled with joy and mirth that they burst into a glorious song that reached the heavens and was so melodious that it could be heard all over the Earth.
A Christmas angel appeared to the shepherds near Bethlehem about the Christ Child's birth too. We still see Christmas angels singing and playing music in Nativity scenes who look so cute and benevolent that they catch young one's attention and fascination instantly.
An Angel on top our Christmas trees symbolizes the divine guidance that Mary and Joseph had during Christ's birth and to help symbolize that in our homes today.
May this wonderful Wednesday find you all blessed by a Christmas Angel or maybe it could just be that you are a Christmas Angel. Either way have a WONDERFUL day full of Christmas wonder.
'On Ya'-ma
Posted by I'm mostly known as 'MA' at Wednesday, December 22, 2010

It is a glorious time of the year. A time to celebrate and sing. This is a beautiful traditional song to sing, it tells the story so well.
Thanks and Have a very Merry time this Christmas Season.

I firmly believe in angels. I also see angels all around us especially at this time of the year. Another great post. Hope your Wed. is a wonderful one. Hugs

Have a "Wonderful Wednesday!"

I like that Angels from the realm of glory song; it is one you don't hear too often during the Christmas season so I'm glad you included it here Ma! Enjoy your day!

I love the poetry in the old hymns, especially the Christmas ones. I enjoyed your post this morning. As always. I'm going on a short trip this morning, so just checking in with you. I'm glad you were there.