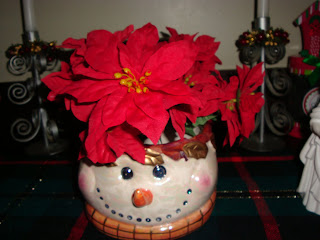 Put something Christmassy in every room in your home

Poinsettias are a widespread Christmas tradition both for gift-giving and holiday decorating. Poinsettias (euphorbia pulcherrima) are native to Mexico and Central America. The Aztecs called it cuetlaxochitl. Poinsettias were introduced in the United States in 1825 by Joel Poinsett, the first U.S. ambassador to Mexico, and quickly caught on as a popular Christmas plant

Legend of the Poinsettia.

There was once a brother-sister pair who was very poor. They lived in a village and they had barely enough to eat two full meals a day. As the Christmas time approached, festivities, parades and parties in the village attracted the children

A large manger scene was being set up in the village church and all the children were eager to go to Baby Jesus and give him the best present. Mario and Pablo also wanted to give expensive presents to the Holy Child that He will love

On Christmas Eve, Maria and Pablo set out for church a little earlier than others to attend the service. Since they had nothing to give to the child, they thought of plucking some weeds that was growing along the roadside to make a soft bed for Baby Jesus and decorate his crib. While they were still decorating the crib of the Baby, other children also arrived.

Mario and Pablo were almost in tears for shame and helplessness when a miracle occurred. Suddenly, the weeds burst into bright red petals that looked like stars and were so beautiful that everyone was awed by their beauty. Everybody realized and said that a gift of love is dearer to Jesus than the most expensive presents that money could buy. Ever since then, Poinsettia flowers have become favorites for Christmas decorations.

I loved the story about the Poinsettia. Love is all that matters!

All of your Christmas stories are so nice, keeps us thinking about the reality of Christmas.

Beautiful story. Every year my friend Pat sends me a poinsetta and mine arrived today. It's a lovely red one -- had white for the last few years. I'll have to take a picture and share it. Take good care. So enjoying your holiday posts.

I never heard that story about the pointsettas; how very sweet of a tale! I love the white ones over the red ones, but both are very pretty. Most of the churches I have attended over the years will decorate the sanctuary with them and then donate them to local nursing homes, etc after Christmas Eve service

good tip about having a bit of Christmas in all rooms; I've in the past put little things even in the bathroom to get festive with the season