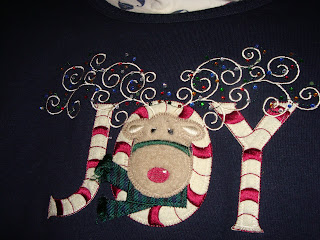 Purchase a special Christmas sweater and wear it often 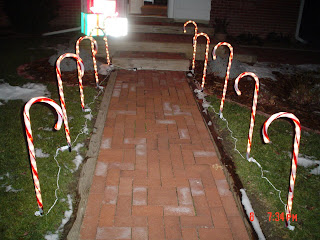 The traditional candy cane was born over 350 years ago, when mothers used white sugar sticks as pacifiers for their babies. Around 1670, the choirmaster of Cologne Cathedral in Cologne, Germany, bent the sticks into canes to represent a shepherd's staff. He then used these white candy canes to keep the attention of small children during the long Nativity service.

The use of candy canes during the Christmas service spread throughout Europe. In northern Europe, sugar canes decorated with sugar roses were used to brighten the home at Christmas time.

In the 1847, the candy cane arrived in the U.S. when a German-Swedish immigrant in Wooster, Ohio, decorated his spruce tree with paper ornaments and white sugar canes. The red stripe was added to the candy cane around 1900, when peppermint and wintergreen were added and became the traditional flavors for the candy cane

Look at the Candy Cane
Tell us what you see.
Stripes that are red
Like the blood He shed for me.

White is for my Savior
Who's sinless and pure!
"J" is for Jesus, my Lord,
God in flesh, be assured!

Turn that "J" around,
A shepherd's staff's in view.
Jesus, our Good Shepherd,
Was born for me and you!

A candy maker in Indiana developed the cane as a witness of Christ's love around 1900. He incorporated several symbols for the birth, ministry, and death of Jesus Christ 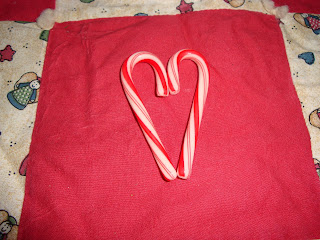 He began with a stick of pure white hard candy; white to symbolize the Virgin Birth and the sinless nature of Jesus; hard to symbolize the solid rock, the foundation of the Church; firmness to represent the promise of God.

The candymaker made the candy in the form of a "J" to represent the name of Jesus, who came to earth as our Savior. He thought it could also represent the staff of the Good Shepherd, with which he reached down into the ditches of the world to lift out the fallen lambs who, like all sheep, have gone astray.

Thinking that the candy was somewhat plain, the candy maker stained it with red stripes. He used three small stripes to show the stripes of the scourging Jesus received, by which we are healed.

The large red stripe was for the blood shed by Christ on the cross so that we could have the promise of eternal life. Unfortunately, the candy became known as a candy cane - a meaningless decoration seen at Christmas time.

Today is our family Christmas celebration I’ll be sharing pictures with you all tomorrow!

I think this small thing was created with great love to be with us for all these years.

I have enjoyed all your Christmas posts, you have put in lots of time and thought on these.

We have a little snow this morning, first one in lower Michigan. Have a nice weekend.

Thankyou for sharing the stories with us all.Very interesting.I have candy canes on the large tree at the coastal flat.I love your attire once again.My words to you today I have placed in your other blog.ENJOY every minute.Take Care God Bless.Kath xx

Hello Ma,
hope that you are having a wonderful family get together and that everyone has arrived safely.
Lookinng forward to tomorrows pictures,
Love Always Sybil x

I too have enjoyed all your Christmas posts. I'm wondering what theme you will use in Jan. There hasn't been a post I haven't enjoyed. Hugs..

that was interesting about the candy cane history Ma; love your new picture on the top of your blog too!

I've enjoyed all of your stories and tips this month as we get ready for Christmas; thanks for sharing them all

I love the story about the Candy Canes.....I never knew that before.