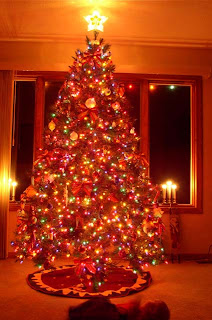 This is DS#3’s tree a couple of years ago

Learn the history of one holiday tradition-mistletoe, the Christmas tree, reindeer, etc. - and share it with your family as you eat your Christmas Cookies 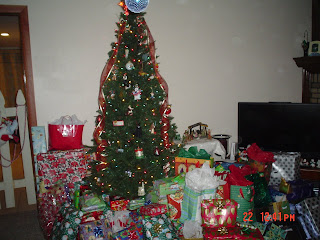 The custom of the Christmas tree can be traced back to Germany in 700 AD. According to legend, the British monk St. Boniface used an undecorated fir tree in his missionary efforts to convert tribe of Germans. Replacing the oak tree which was sacred to the Druids, St Boniface preached, "Let this be called the tree of the Christ Child". From then on, Germans began celebrating Christmas with the planting of a fir sapling.

The use of a Christmas tree in doors appears to have begun in Germany. German Christians would bring trees into their homes to decorate. In some areas evergreen trees were scarce so the families would build a Christmas pyramid, simple wooden structures which they decorated with branches and candles.

The tradition of the Christmas tree eventually spread throughout Europe. The English Royalty help popularize the tree in England by decorating the first Christmas tree at Windsor Castle in 1841. Prince Albert, husband of Queen Victoria, decorated the first English Christmas Tree with candles, candies, fruits, and gingerbread.

Early Christmas trees were often decorated with apples, nuts, cookies, colored popcorn and candles. The invention of electricity in the early 20th century and use of electrical Christmas lights helped spread the use of the Christmas tree.

It is now common in most communities throughout the US to feature public displays of Christmas trees. Every year the President of the United States lights the National Christmas Tree in Washington and in New York skaters spin beneath the lighted tree of Rockefeller Center. Through Europe and the rest of the world the Christmas tree has also become readily accepted and adored.

Christmas Trees are always evergreen trees, because the evergreen tree is the tree of life. It stays green all winter, and gives us the feeling of hope 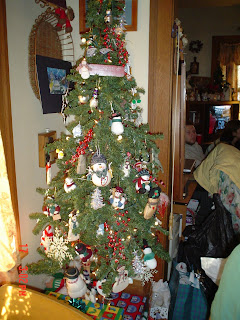 And this is my little tree…I collect snowmen ornaments

This is what I was able to find out on the history of the Christmas tree. One thing I know is a real tree smells heavenly and it’s something I’ve not had in years.

Everyone in my family has an Angel tree...set to remember those whom no longer are with us....sometimes I wish we never had that tree, but mostly I'm glad that "they" can still share Christmas with us....
xoxoxo

Thanks...another great post!!
Hope i can get our tree up this weekend.....LindaMay

I did enjoy reading this Ma and you're right a real tree does smell heavenly - but on the other hand also shds its needles thus keeping you hoovering forever! Take the fake!

I always wondered what the tree had to do with the birth of Christ. I like your little snowman tree. I have a snowman collection too but only a few are ornaments. We have a big evergreen tree at the base of our driveway and when I walk down there to get the mail I can smell the wonderful scent. Feels like I am in a Christmas tree lot. Then I come inside to my artificial tree. LOL

What a wonderful post. I collect snowmen too. I love the smell of a real tree. We too haven't had one in years. I do miss the fun of going out in the bush and finding that perfect tree. Hugs..

good idea with the traditions and sharing it with family, Ma. A lot of times people don't realize why we do what we do in celebrations (did that make sense, LOL)

loved all the trees; your snowman one is so cute! I like them and snowflakes on our tree :)

I love the photos of both the trees, so beautifull decorated. I do not have Christmas collections of anything, wish I did. Always fascinating to read traditions again.

thank you for sharing about the Christmas tree! I love your's. I love Snowmen too!