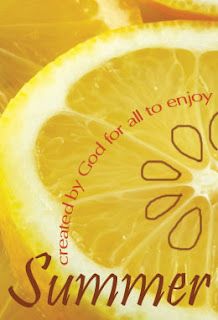 Can you believe it is the last day of June already? July and the lazy hazy days of summer will upon us. Soon we’ll be having Christmas in July in the field in front of my camper. The fireflies have returned to put on another Summer light show every evening for all of us to enjoy. I have even sat in my chair at the campfire and looked up at the trees and saw them twinkling in the tree tops.

They will be our natural fire works for the 4TH of July. The grand‘babes’ love to run around catching them and watching their little containers light up. Of course we always let them go before the evening is over. Nature just provides so much entertainment that I’m so thankful I get to enjoy it.


Lightning bugs, like many of God’s creatures do have a purpose after all. They are a reminder of a creative God who loves us so much, He'd even paint the rear end of a bug ...
Just to see us smile....

Thought for Today
Anytime of the year can feel like Christmas if you have love in your heart and light in your soul.

A lovely read, Ma! I don't thikn we have freflies here. It all puts me in mind of that film "Summer Magic".

I remember as a child watching fireflies. We don't have them where I live now and I truly miss not having them here for the kids to watch. Have a wonderful day.

I hadn't heard that glow worm song in years; it was cute to read along with it; I honestly don't think we have fireflies here in So. Calif. They would be cool to observe some summer evening. I know, it is amazing how fast the month of June went!

Do you know I have never seen a firefly. Not sure we even have them over here, must be a magical sight.

Hey Ma...well how interesting that we were all out in the yard last night and commenting about the "lightning bugs" have come back...the kids have so much fun running around...and asking for a container LOL...had me hopping there for a minute or two they did!!!! happy day to ya...hugs from Ora in KY

we have lots of lightening bugs here. the kids love to chase them and put in mason jars.

I cannot believe the year is half over, what a ride it's been!