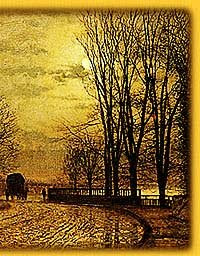 As you travel through life there are always those times
When decisions just have to be made,
When the choices are hard, and solutions seem scarce,
And the rain seems to soak your parade.
There are some situations where all you can do
Is simply let go and move on,
Gather your courage and choose a direction
That carries you toward a new dawn..
So pack up your troubles and take a step forward
The process of change can be tough,
But think about all the excitement ahead
If you can be stalwart enough!
There might be adventures you never imagined
Just waiting around the next bend,
And wishes and dreams just about to come true
In ways you can't yet comprehend!
Perhaps you'll find friendships that spring from new things
As you challenge your status quo,
And learn there are so many options in life,
And so many ways you can grow!
Perhaps you'll go places you never expected
And see things that you've never seen,
Or travel to fabulous, faraway worlds
And wonderful spots in between!
Perhaps you'll find warmth and affection and caring
And somebody special who's there
To help you stay centered and listen with interest
To stories and feelings you share.
Perhaps you'll find comfort in knowing your friends
Are supportive of all that you do,
And believe that whatever decisions you make,
They'll be the right choices for you.
So keep putting one foot in front of the other,
And taking your life day by day...
There's a brighter tomorrow that's just down the road
Don't look back! You're not going that way!
GOOD MORNING!

Many many people are having some difficult times right now and some are under a lot of stress about how they are going to provide a home and the necessities of life for their families. Stress is a terrible thing and can do a lot of harm…so PLEASE DO NOT STRESS about it all.

I don’t often talk about my past and the troubles I’ve had but I am going to tell you a little bit about how I survived one very tough time of my life.

Back in the late 80’s and early 90’s our country went through a recession. I don’t know if it was as bad as this one, but it was bad in the fact that my hubby lost his job. At the time it was one of the best jobs he’d ever had. He would have been vested for his 401 k plan and had good insurance coverage and was even covered for $100,000.00 life insurance if something would happen to him.

We were doing the best we had in a long long time and I was preparing to quit my job and become a SAHM once again. But he was permanently laid off two weeks before he reached the 5 year mark when he would have been vested with that company. He lost the 401k plan, his health and life insurance and we began living on my small paycheck and his unemployment check. We had no insurance as we could not afford it.

We discovered that we could live on this by using every way there was to economize. He remained unemployed until his death. He searched high and low for employment. He was either over qualified or no one wanted to hire someone with his years of experience. After a year of being out of work we were relieved when the government stepped in and extended his unemployment benefits. I’ve heard they are going to do that again now too.

He was 50 years old at the time and became quite depressed. We had dear friends at our church that helped us out over and over during this time and I cannot say Thank You enough to all of them.

The thing is that although I’m convinced that we do not have anything to do with when our time on earth is up, the stress that he lived under had to have had something to do with the sudden heart attack that he died from.

I’m telling you all this so that maybe I can prevent someone else from having the same thing happen to them. Life does go on and even if it isn’t the same kind of life we had, it’ll all work out if you just have faith.

Take it one day at a time and remember to count your many blessings.

There is a certain relief in change,

even though it be from bad to worse!

As I have often found in travelling in a stagecoach,

that it is often a comfort to shift one's position,

and be bruised in a new place

PS : I’ll have pictures for you all to see tomorrow of our Family Easter Gathering which is today

Pam,
You are such a wonderful person! I'm so sorry for all that you had to endure & for losing your sweet & precious husband. I appreciate all that you do on a daily basis to try to lighten other's load. Thank you for that. I treasure the friendship that I have with you! Thanks for being there again & again for so many! You are an ANGEL!

That is so well said. I am sorry you've had to endure such a hard life. The rewards will be yours someday as we know. Enjoy your day with the family today.

First I love the pictures.

Second wise, wise words. Stress does horrible things to our body. Thanks for sharing from your heart. Hugs..

I can't actually say that I personally have ever truly suffered from the depression but my Mother and Father sure did. There was many a time when my Mother would say that she had had her dinner etc. and give us three girls a meal of sorts ( I never questioned this till long time after to discover she never had any for herself) ever after once my Father was back at work she built up a store cupboard that would always keep us well fed for some time if such a thing were to happen again. A good idea that I have also followed. An extra tin etc when we can afford it will be useful one day
Thank you Ma as always for your wise words,
Love Sybil xx

These words are so true Ma.My eldest Son had an heart attack two years ago at the age of 38yrs and I will always believe his was brought on by stress from his bad attitude wife.I am sorry to have to say.Knowone will ever convince me any differant.I have had plenty stress in my life too and I know what illnesses it can cause.Redundancy from my partner one time in our togetherness and 6mouths to feed,four children all being under ten yrs old..I was so saddened to learn of your hard times and how your Dear Husband died of an heart attack.You deserve the best in life and I pray the future holds nothing but that for you.Prayers for you always.Take Care God Bless Kath xx

Well this is a good one too. We have indeed been under some work and home stress lately. I'm praying that this week finds some relief.
Today has been good!