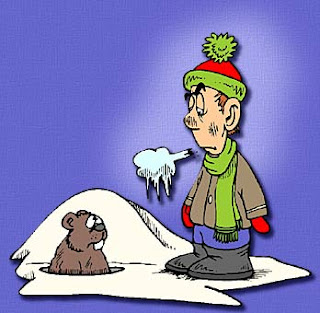 Away in a meadow all covered with snow
The little old groundhog looks for his shadow
The clouds in the sky determine our fate
If winter will leave us all early or late.
Don Halley

The legend of Groundhog Day is based on an old Scottish couplet: If Candlemas Day is bright and clear, there'll be two winters in the year.
Every February 2, people gather at Gobbler's Knob, a wooded knoll just outside of Punxsutawney, Pennsylvania.
Residents contend that the groundhog has never been wrong.
The ceremony in Punxsutawney was held in secret until 1966, and only Phil's prediction was revealed to the public. Since then, Phil's fearless forecast has been a national media event.
Approximately 90% of the time, Phil sees his shadow
If Phil comes out of his burrow into sunlight on February 2nd and spies his own shadow, he's said to jump back down underground -- dooming us all to six more weeks of winter

‘On Ya’-ma
February, when the days of winter seem endless
and no amount of wistful recollecting
can bring back any air of summer.
Shirley Jackson

I won't be long now before spring.I always say February is a short month,and spring will be here before we know where we are.I would love to join in the Ground Hog celebrations.Lets hope Phil doesn't see his shadow.The snow has fallen all night here and is still falling.Flights disrupted public transport etc.Most of the country came to a standstill early today.Brrrr.I loved the little poem.Have a lovely Monday.Time for my afternoon cuppa now.Take Care God Bless Kath xx

Certainly now Spring here, it is snowing very hard. Still, at long last we have some and the boys were so excited. They have at last been able to build a snowman.

Love from a Whiteout Box here!! although glad at the thought that spring will soon be here...
It is quite a laugh at how we cope ??? with snow here in England. a lot of schools closed. I can't ever remember my school closing in Scotland all the time I was there even remember being drawn there on a sledge...but miss school no way. Now I think of it how did the teachers ever get there from Edinburgh at least 12 miles to drive !!
Love for now Keep warm.
Sybixx

Im not sure I can wait six weeks hee hee ,We have lots of snow, very unusual, but the children are loving it ..love Jan xx

I am sooo ready for spring! lol See you have some great new photos on your sidebar. Hope your week is going well. Blessings, Janie