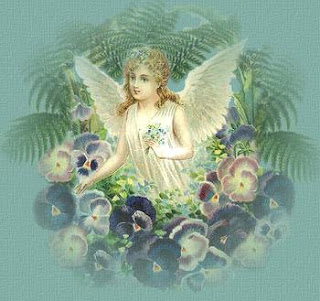 The Angel of February is an angel of patience.
During the dark blustery nights of February when nature is n a deep chill and we long for a sign of warmth and life, this angel can help us learn to wait with grace the first signs of spring.

February's angel teaches us that winter has its own special peace, that being snow bound or staying indoors can give us a welcome reprise from the busyness of life. In February we can complete the unfinished projects and prepare for new initiatives in the spring.

The Angel of February brings us the gift of patience, helping us to enjoy the solitude and quiet of winter, guiding us to replenish our energy for the warm busy days to come.

Most everyone marks each month of the year with a particular holiday including February with Valentine's Day. Every month also represents a particular time to reflect on history or other points of interest. For example, The Chinese Lantern Festival marks the ending of the two-week celebration of the Chinese New Year. Every day during the month of February there is a birthday of a famous person or a day in history to remember

Only a couple more weeks, and Fat Tuesday will be here to mark the beginning of Mardi Gras. Mardi Gras always begins 46 days before Easter. Lent will begin on Ash Wednesday which is February 25th this year and American Heart Month also takes place each February

February is a very busy month compared to most other months in respect to holidays. You all know I like to celebrate every day as a special day anyway so we’ll be doing a lot of merry making this month for sure.

And don’t forget to stay tuned for the Ground Hog Prediction tomorrow too. Every Ground Hog’s Day we wait to see if he sees his shadow or not. Of course we are all hoping for an early Spring this year.

LOVE, a noun, as defined by the silly and the sentimental...is....
* man's grand delusion that one woman differs from another;
* a sea of emotions entirely surrounded by expenses;
* what Plato described as "a grave mental disease";
* something they say is blind; it's marriage which is the real eye opener;
* that emotion which is not true until returned;
* that delightful interval between meeting a beautiful girl and discovering that she looks like a haddock {John Barrymore};
* what rich countries have in common with the residents of all third-world countries;
* is like measles; much worse when it comes late in life;
* the most slippery word in the human language; used by knaves to seduce, by fools for comfort, and by most men to placate the female of the species;
* the only fire for which there is no insurance;
* an emotion, even if unreturned, has its rainbow;
* the only game that two can play and both win;
* the last and most serious of the childhood diseases;
* what makes marriage possible; habit makes it last;
* is the wisdom of the fool and the folly of the wise;
* a disease like measles, we all have to go through it;
* a temporary insanity curable by marriage or the removing of the patient from the influences under which he or she incurred the disorder;
* the tie that blinds;
* consists of happiness, given back and forth;
* the only thing that has changed over the millions of years of playing this game is that trumps have changed from clubs to diamonds;
* that which makes the world revolve;
* a situation which happens when you think almost as much of another as you do of yourself;
* is a fan club with only two members;
* the only virtue that can be divided endlessly and still not be diminished;
* the triumph of imagination over intelligence;
* the child of illusion and the parent of disillusion;
* a strange feeling that comes over a man; when he keeps wanting to call a girl by his last name;
* is like the action similar to an hourglass: the heart fills as the brain empties;
* a situation; when it is true, does not mean gazing into each other's eyes, but looking outward together in the same direction as life beckons;
* something which combines the two greatest powers on earth; war and peace;
* the balm that heals the wounds that words make.
Author unknown

I do hope it is an early spring for your part of the country, Ma; it seems like its been an extra harder one this year for the East Coast and surrounding areas

February is a short but busy month for sure!

Hi Pam. There are lots of holidays in February that help in the patience department and brighten up the winter days. Hope you have a very good one today :)......

So happy you had a wonderful day.I loved the pictures on your sidebar.What a wonderful family you have and a wonderful Mom they have too.Princess Star and Prince charming are pricless.Patience is something I have plenty of,but still I wouldn't grumble at being given more.Looking forward to reading tomorrows post on the Ground hog.Have a blessed Sunday.TakeCare God Bless Kath xx

Pam I enjoyed looking at all the pictures of you and the family's sponsered walk around the Mall ,great entry too ,Im a February girl... but not big on patience ,though thinking about it Im better than I used to be ,comes with age I suppose lol ..love Jan xx

Glad to have found your blog. You have some very interesting posts on here with lots of trivia I was not aware of--like the Tuesday before Mardi Gras being called Fat Tuesday.

I love your post headers too, now that I figured out where you got them from (Chapter-month; Page-day; and Book - year). That is so creative.

I am glad that you got safely to and back from your..marathon...Love the photo's.
I had thought when I was reading about Fat Tuesday it was a celebration for all us fatties !!!!
ah well I can dream...
Much Love Sybil xx

Hope spring comes early for you this year. Looks like a good time by the pictures on yours sidebar.

Loved the photos...and yes that groundhog is going to give us news one way or the other...can't wait! Have a wonderful week ahead, hugs and love,
Joyce

My children were just asking me when ground hog day was. Thank you for the thought of the day!

We have 4 birthdays in the month of Feb. Hope your week is blessed. Janie