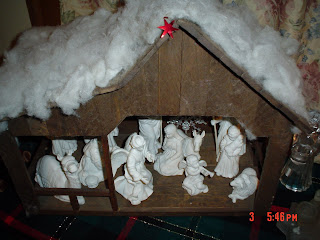 Is it just a day at the end of the year?
A season of joy, merrymaking and cheer?
Is it people and presents and glittering trees?
Ah no, it is more than any of these.
For under the tinsel and hidden from sight
Is the promise and meaning of that first Christmas night
When the shepherds stood in wondered awe
And felt transformed by what they saw.
So let us not in our search for pleasure
Forego our right to this priceless treasure
For Christmas is a God-given day
And let us remember to keep it that way. 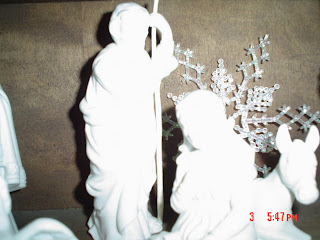 Hope you all are almost done with your shopping and wrapping and are pretty well set for Christmas by now. My preparations are going at a very slow pace but I’ll get there.

The cold and snowy weather we’ve been having should be setting me for lots of good Christmas thoughts, but I’m a little low on steam right now. It is beginning to look a lot like Christmas every where I go… except at my house.

I’ve put in some pictures of my Nativity set today just to show you I really do have one. It’s up in the attic somewhere and I don’t know if it’ll make it downstairs but I did take pictures one year so I can show them to you. 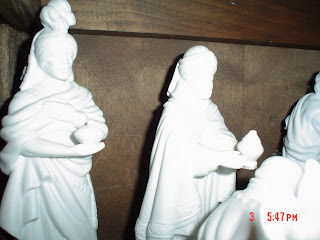 Here is a little Nativity trivia for you:
The Christmas Nativity scene depicts the birth of Jesus Christ on Christmas morning
Each figure in a nativity scene has meaning, and the manner in which they are arranged will contribute to the significance and visual appeal

A standard nativity set has seven pieces, but nativity scenes can always be enhanced with new figures.

The central position in any nativity scene should be occupied by the Christ child. He is the reason for the display. Your nativity set should include a stable and manger. Place the manger at the center of the stable. A nativity tradition is to not place the baby Jesus in the manger until Christmas morning, but it is not necessary to follow this prac

The nativity figure closest to Christ should be His mother, the Virgin Mary. A common practice is to place the figure of Mary on one side of the Christ child and His father Joseph on the other

If you have nativity pieces representing shepherds or the three wise men, these can be placed in the first circle. If you have both, placing the shepherds closer than the three Magi would be in keeping with the Biblical accounts
The commonest secondary figures besides these are angels and animals. An ideal position for nativity angels is above your nativity set. If this is impossible, they may be placed within the stable behind the holy family.

The animals commonly used in nativity sets are sheep, oxen, and camels. The purpose of these figures is to remind you of the humbleness of Christ's birth, or in the case of the camels, the long journey of the Magi. The best way to incorporate nativity animals is to place them next to appropriate characters: sheep with the shepherds, camels with the three wisemen. 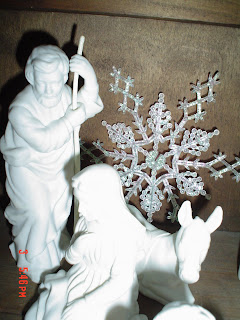 And here is another piece of trivia -- On line yesterday I happened to find this little article about pet owners, I own a beagle and this is what it said

You are inquisitive and always willing to learn new things. The Beagle is constantly questioning. If you own one of these dogs, chances are you are a curious, willful person who is loyal to friends, tough on enemies and pretty stubborn, according to the AKC.

That is about all that is new at my house 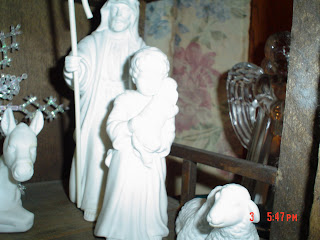 In this poem written some 15 centuries ago, Augustine tried to capture the mystery of the Incarnation:

Maker of the sun,

He is made under the sun.

In the Father he remains,

From his mother he goes forth.

Creator of heaven and earth,

He was born on earth under heaven.

Unspeakably wise, He is wisely speechless.

Filling the world, He lies in a manger.

Ruler of the stars, He nurses at his mother's bosom.

He is both great in the nature of God,

and small in the form of a servant 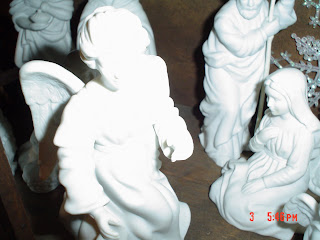 From the Song O Little Town of Bethlehem 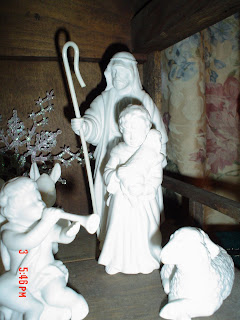 Thanks for the trivia....very interesting. I haven't bought anything yet for Christmas. Colt doesn't know what he wants...so how am I supposed to know? I'll probably be shopping Christmas Eve....LOL

That is such interesting trivia...thanks for sharing. Shopping done here...now the wrapping ...hope you have a great week...hugs and love,
Joyce

I loved the trivia about the nativity set. The hosptial where Kathy is at is a Catholic hospital and they do not have baby Jesus in there yet. I was explaining this to my husband when he asked me where the baby was. I told him He didn't get put in there till Christmas morning. My husband always points out nativity sets to me since I want one really bad but have not found one that I am truly in love with yet. I am still looking though. Have a great day. Linda

I love the trivia on the nativity. I didn't know the significance of each piece. Thanks for the information. I hope you have a good day.

I am spell bound and so in awe of you ,just the right entry again ,I loved all the ..what you called trivia ..love Jan xx

Loved all the trivia today and the poems. Our house is not ready for Christmas yet we will get to it this weekend I hope that's about our usual time, Shopping wise small family so we are nearly there. Love Joan

beautiful nativity set; I enjoyed reading the trivia about it; growing up we never put the manager in until Christmas morning; now I just put it in when I put the nativity set up

I hope your day is a good one

your set looks so much like mine... My daughter works for avon and I bought mine a piece at a time and I love it,,, Is yours an Avon one too?
Sandra

This was interesting. I enjoyed this entry. Sorry I haven't been by for awhile. I like your manger scene.
Have a good week!
Hugs Pam