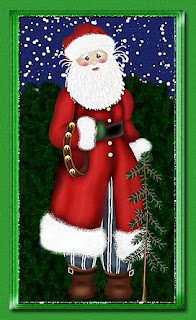 St. Nicholas Day is today.
Yes, there really was a Christian Saint Nicholas. He lived in the country of Greece, just a couple hundred years after the birth of Christ. This day is in honor of Saint Nicholas and his life.
Saint Nicholas became a priest, and later, a Bishop of the early Catholic Church. True to the Christian concept of giving up belongings and following Christ, St. Nicholas gave up all of his belongings. He was well known for giving to needy people, especially children. There are many stories and tales of him helping out children in need.
The practice of hanging up stockings originated with Saint Nicholas. As the ancient legend goes, Saint Nicholas was known to throw small bags of gold coins into the open windows of poor homes. After one bag of gold fell into the stocking of a child, news got around. Children soon began hanging their stocking by their chimneys "in hopes that St. Nicholas soon would be there".
It wasn't until the 1800's that the spirit of St. Nicholas' life evolved into the creation of Santa Claus. And, this happened in America. Santa Claus emerged (or evolved) from the stories and legends of St. Nicholas. Santa Claus was kind and generous to children. Unlike "St. Nick", Santa Claus is largely a non-religious character.

I didn’t always know about St. Nicholas Day. I was a mom with small children when I found out about it. From then on our little ones shoes were sat out on the eve of St. Nick’s day and when they woke up the next morning they were fill with some little gifts and some candy. There were some happy faces in the morning at our house for sure. I love being a mom and have some wonderful memories of when my babes were young.

I really think it is important to remember these dear folks from the past – Our Saints- as they are the heros of our faith. They model the way we should live. Stories need to be told about them so that others will have some guidelines about how to live as we should.

I don’t know if my children are passing on this tradition with their children this year. I suppose I’ll eventually hear about it if they did. Being a long distance Grand’ma’ it sometimes takes awhile.

It is really cold here today and we have more promises of snow. So far nothing has materialized. I’m grateful for that as our roads become very hazardous. I like that old song ‘I’m Dreaming of a White Christmas’ but as far as I’m concerned that’s the only time of year we really need it. Winter hasn’t even officially arrived and I’m tired of the cold and am ‘Dreaming of Spring’

Lean your ear this way
Don’t you tell a single soul
What I’m going to say
Christmas Eve is coming soon
Now you dear old man
Whisper what you’ll bring to me
Tell me if you can. . .

Choose for me dear Santa Claus
You will know what’s best!

ENJOY YOUR WEEKEND!!
LOVED HEARING ABOUT ST. NICK...REMEMBER HIM FROM MY CHILDHOOD...

That was one tradition we did not follow. We did however hang out stockings on Christmas eve.

Love that song. I used to play it on the keyboard and Becky and I would sing it together when she was young. She is now teaching her sons. As for snow, I just wish we COULD have some.

Hello I hope you have a blessed day I have a award waiting for you on my page please send it to 7 more people thank you!! Kat:)

My hubby spent one St Nicks day in Holland and he was told by hotel staff to put his shoes out the evening before and they were stuffed with chocolate the next morning. That day all the shops were giving sweets out to the children. He thought it was lovely being a chocoholic it suited him just fine. Love Joan

I love that story. Have a blessed day today.
Kathy

Thanks for such an informative entry... Wonderful story!!

What lovely memories of your childrens childhood ~ I think the story of St. Nick is lovely ~ Ally x

growing up we always put out our socks for St. Nicholas; got them full of nuts and candy;always fun to do but I didn't carry the tradition over to my kids; not sure why I didn't but my sister has with her kids; always like reading the story of St. Nicholas

I hope the winter isn't too harsh for your part of the country Ma and intermingled with cold days, I hope there are some "warm" ones to remind you of the spring to come

I didn't put out anything for st nick this year but I plan to get a big candy cane for my son... we never missed a year.... now my grandchildren and great grandchildren do the same... by the way I am sick of the snow already too and it is so darned cold... way below normal already
Sandra

Hope you have a great weekend.
It's cold and snowy my way.
Take care, Chrissie

A wonderful tradition. Thanks for
telling about St. Nicholas. Have
a blessed holiday.

A wonderful tradition. Thanks for
telling about St.Nicholas. Pat

A great tradition for families
to continue. Keep on telling them.