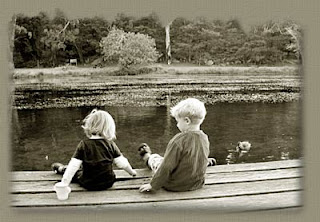 "Where are we going?" said Pooh hurrying after him and wondering whether it was to be an Explore or a What-shall-I-do-about-you-know-what."Nowhere," said Christopher Robin.
So they began going there, and after they had walked a little way,
Christopher Robin said: "What do you like doing best in the world, Pooh?"And of course, what Pooh liked doing best was going to Christopher Robin's house and eating,
"I like that too," said Christopher Robin, "but what I like doing best is Nothing.""How do you do Nothing?" asked Pooh, after he had wondered for a long time.
"Well, it's what people call out at you just as you're going off to do it, What are you going to do, Christopher Robin, and you say, Oh, Nothing, and then you go and do it."
"Oh, I see," said Pooh."This is a nothing sort of thing that we're doing now."
"Oh, I see," said Pooh again."It means just going along, listening to all the things you can't hear, and not bothering.

It seems to me that simplicity is something to be desired and worth striving for. A lot of people I know pack so much into their lives, that sometimes finding a quiet moment is hard to do. Not only do we clutter up our homes with lots of stuff, but we clutter up our lives with things that don’t really matter also. It pays to take a long hard look at what is really necessary. Some get so involved in things outside their family life, that the family gets left behind. Some get so overwhelmed with work that nothing else seems to matter. Balancing it all out is so important for our well being, both mentally and physically.

In our world many have an “I want it all’ disposition. Take it from me we just cannot have it all without consequences. I’ve learned to step back and evaluate many things in my life and when it comes down to it, I make do with a lot less than most folks I know and I’m probably more at peace that a lot I know too.

I do hope that you can have a peaceful day and not let any outside influences stress you out. Remember the story of Christopher Robin and just go along with what you need to do and don’t bother….

Today I know that I cannot control

the ocean tides. I can only

When I struggle and try to organize

the Atlantic to my specifications, I sink.

If I flail and thrash and growl and grumble,

I am borne aloft.

My sentiments exactly ,we dont need so much at all ..love Jan xx

I agree with Jan it is nice to be contented. Love Joan

again wise words!!! I'm reminded of that scripture Be still and know that I'm God (Psalm 46:10) but first we need to remember to BE STILL; hard advice sometimes for us to take in this hustle-bustle world we live in

Wishing you a wonderful New Year. You have a great looking family. Blessings, Janie