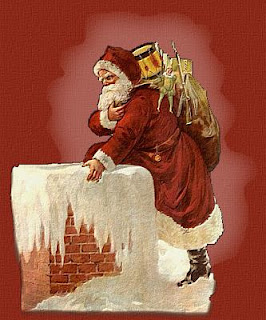 It happened one day at the year's white end,
Two neighbors called on an old-time friend
And they found his shop so meager and mean,
Made gay with a thousand boughs of green,
And Conrad was sitting with face a-shine
When he suddenly stopped as he stitched a twine
And said, "Old friends, at dawn today,
When the cock was crowing the night away,
The Lord appeared in a dream to me
And said, 'I am coming your guest to be'.
So I've been busy with feet astir,
Strewing my shop with branches of fir,
The table is spread and the kettle is shined
And over the rafters the holly is twined,
And now I will wait for my Lord to appear
And listen closely so I will hear
His step as He nears my humble place,
And I open the door and look in His face. . ."
So his friends went home and left Conrad alone,
For this was the happiest day he had known,
For, long since, his family had passed away
And Conrad has spent a sad Christmas Day.
But he knew with the Lord as his Christmas guest
This Christmas would be the dearest and best,
And he listened with only joy in his heart.
And with every sound he would rise with a start
And look for the Lord to be standing there
In answer to his earnest prayer
So he ran to the window after hearing a sound,
But all that he saw on the snow-covered ground
Was a shabby beggar whose shoes were torn
And all of his clothes were ragged and worn.
So Conrad was touched and went to the door
And he said, "Your feet must be frozen and sore,
And I have some shoes in my shop for you
And a coat that will keep you warmer, too."
So with grateful heart the man went away,
But as Conrad noticed the time of day
He wondered what made the dear Lord so late
And how much longer he'd have to wait,
When he heard a knock and ran to the door,
But it was only a stranger once more,
A bent, old crone with a shawl of black,
A bundle of faggots piled on her back.
She asked for only a place to rest,
But that was reserved for Conrad's Great Guest.
But her voice seemed to plead, "Don't send me away
Let me rest awhile on Christmas day."
So Conrad brewed her a steaming cup
And told her to sit at the table and sup.
But after she left he was filled with dismay
For he saw that the hours were passing away
And the Lord had not come as He said He would,
And Conrad felt sure he had misunderstood.
When out of the stillness he heard a cry,
"Please help me and tell me where am I."
So again he opened his friendly door
And stood disappointed as twice before,
It was only a child who had wandered away
And was lost from her family on Christmas Day. .
Again Conrad's heart was heavy and sad,
But he knew he should make this little child glad,
So he called her in and wiped her tears
And quieted her childish fears.
Then he led her back to her home once more
But as he entered his own darkened door,
He knew that the Lord was not coming today
For the hours of Christmas had passed away.
So he went to his room and knelt down to pray
And he said, "Dear Lord, why did you delay,
What kept You from coming to call on me,
For I wanted so much Your face to see. . ."
When soft in the silence a voice he heard,
"Lift up your head for I kept My word--
Three times My shadow crossed your floor--
Three times I came to your lonely door--
For I was the beggar with bruised, cold feet,
I was the woman you gave to eat,
And I was the child on the homeless street."
Helen Steiner Rice

Much that once was is lost. For none now live who remember it.
From Lord of the Rings: Fellowship of the Ring

GOOD MORNING
Sometimes we do have to repeat some things along the way in order for others to remember how it was or maybe how it should be. In telling about Christmas, I’m also relating to what our lives are all about. Loving sharing and giving should be a way of life.
I always loved the chats around the table with my parents over the years. They told of their childhoods and what they were told of their parents, my grand parents lives. So much has changed that if we don’t keep telling the stories, no one will know about what came before.
I suppose the story of the very first Christmas is like that too. How it all happened and why has been passed on for a couple thousand years now. It has been the greatest story ever told and think the reason is that it gives us all hope.

THOUGHT FOR TODAY
It comes every year and will go on forever. And along with Christmas belong the keepsakes and the customs. Those humble, everyday things a mother clings to, and ponders, like Mary in the secret spaces of her heart.
Marjorie Holmes

Bless us Lord, this Christmas, with quietness of mind;
Teach us to be patient and always to be kind
Helen Steiner Rice

Oh, what a beautiful entry. I enjoyed the story sooo much from Helen Steiner Rice!!! Thank you soooo much for sharing this. Have a wonderful day!!!

Hi Pam. Hope this day finds you feeling fine. I try to throw in a story to my kids about how it was for me growing up and so does my dad. I'm not sure my daughter gets the point...that a "poorer" way of life is not the worst way of life:).

It is such a great pleasure to read your entries every single day. I am truly blessed to count on you as a friend...It is so so important to continue to repeat the true meaning of Christmas as often as we can.
Love sybil xx

I love the stories of Christmas times and the glow of love that we get from them...I too remember sitting around the table after dinner..listening to my Mom and sisters talking about "the old days"...LOL...I was the youngest!!Merry Christmas ... God Bless...Hugs from Ora in KY

imagine the world if we were to be patient (especially this time of year) and if we were always kind; it would be gentler and a touch more peaceful