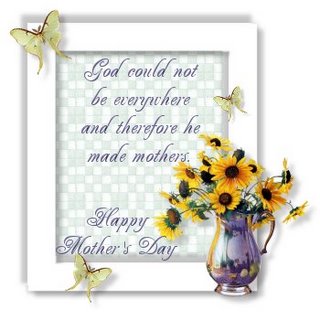 The young mother set her foot on the path of life.
"Is this the long way?" she asked.
And the guide said "Yes, and the way is hard. And
you will be old before you reach the end of it. But
the end will be better than the beginning."

But the young mother was happy, and she would not
believe that anything could be better than these
years.

So she played with her children, she fed them and
bathed them, and taught them how to tie their shoes
and ride a bike and reminded them to feed the dog,
and do their homework and brush their teeth. The sun
shone on them, and the young mother cried "Nothing
will ever be lovelier than this."

And the morning came, and there was a hill ahead, and
the children climbed and grew weary, and the mother
was weary. But at all times she said to the children,
"A little patience and we are there."

So the children climbed, and as they climbed they
learned to weather the storms. And with this, she gave
them strength to face the world. Year after year, she
showed them compassion, understanding, hope, but most
of all....unconditional love.

And when they reached the top they said, "Mother, we
would not have done it without you."

The days went on, and the weeks and the months and the
years, and the mother grew old and she became little
and bent. But her children were tall and strong, and
walked with courage.

And the mother, when she lay down at night,
looked up at the stars and said,
"This is a better day than the last, for my children have
learned so much and are now passing these traits on
to their children."

And when the way became rough for her, they lifted her,
and gave her their strength, just as she had given them
hers.

One day they came to a hill, and beyond the hill, they
could see a shining road and golden gates flung wide.
And mother said: "I have reached the end of my journey.
And now I know the end is better than the beginning,
for my children can walk with dignity and pride, with
their heads held high, and so can their children after
them."

And the children said, " You will always walk with us,
Mother, even when you have gone through the gates."
And they stood and watched her as she went on alone,
and the gates closed after her. And they said: "We
cannot see her, but she is with us still.

A Mother like ours is more than a memory.
She is a living presence."

No possession is more valuable than the fact that you can celebrate Mother's Day.

If you were taught about God, you learned how to have faith.