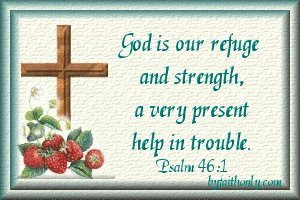 It was good for me to be afflicted so that I might learn your decrees. The law from your mouth is more precious than thousands of pieces of gold and silver.


Learning From Our Circumstances.

In I Chronicles 13 we see David trying to bring the ark back to the city so that it could be returned to a place of prominence. Everyone agreed as this was a most pleasing idea !

The ark was called ‘Lord enthroned upon the Cherubim’

The cart carrying the ark was about to upset and Uzzah reached His hand to steady it. The Lord be came angry and struck him dead because he had laid his hand on the ark.

David was disturbed and feared the Lord. Therefore he left the ark at the house of Obededum and the Lord blessed Obededom’s household and all that he possessed.

God reigned judgement on David’s parade. It seems unfair, but there is more to the story...

In I Chronicles 15:1-15 we see new instructions for transporting the ark of God

No one may carry the ark but the Levites, they had not been with them the first time they tried to transport the ark.

The Levites bore the ark on their shoulders as Moses had ordained.

Then make poles of acacia wood and plate them with gold. These poles you are to put through the rings on the sides of the ark and never be withdrawn.

God was angry at David the first time, because David made a decision with out consulting Him. When David checked the manual he found the Lord’s way and God was pleased.

David went to God’s word and found the correct instructions even though he feared God.

God does not allow compromise.

David accepted tragedy and failure as a challenge to search God’s Word for the answers. We need to turn to God’s Word in difficult situations

My soul weeps for sorrow , strengthen me according to your words

Before I was afflicted, I went astray, but now I hold to your promise

Had not your law been my delight, I would have perished in my affliction

Before dawn, I come and cry out. I hope in your words

We miss the most important instructions if we fail to get into God’s Word.

In Job 22:22 we see how to accept these instructions

We are told to lay up His instructions in our hearts.

In Proverbs 4:13 it says…Hold fast to instruction, never let her go. Keep her for she is your life.

In Proverbs 16:20 we are told – Happy is he that trusts in the Lord

I know that when I lay the Lord's instruction upon my heart, I think of things in a whole new light. When I might have been devastated, I have received hope.


"Hold on to instructions...for it is your life"

Tomorrows study will be – Gentleness in Teaching