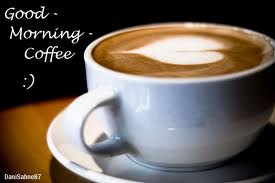 May your coffee kick in before reality does.
Author Unknown
September 29th - don’t forget to grab your coffee 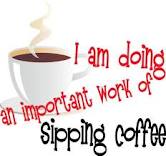 Life without coffee is like something without something - sorry I haven't had any coffee yet.
Author Unknown
There are those people like me that can’t start the day before they have a cup of coffee.  We're coffee addicts.
I don’t do well at all until after I’ve had my first cup of coffee.  It’s like I’m walking around in a fog until after I drink that first cup.  It’s become a habit for me to hit the on button on the coffee maker first thing when I wake up.  I’m not a very nice person until it sets in .  I’m grouchy and don’t want to talk to anyone until after I drink my first cup.
Poor DDH had a rude awakening when we first married.  He was a sunny morning person and wanted to talk and he couldn’t figure out why I was so crabby early in the morning.  He finally asked my mom what the problem was. He couldn’t figure out what was wrong.  My mom said, just leave her alone until after she has her coffee and everything will be ok.  That’s a true story.
As I’ve gotten older, things are no better, but now I live by myself so there’s no chance I’ll upset anyone.  I still start everyday with a good cup of hot coffee and a prayer or two and then I can face just about anything with a smile.  but not before then.
Now you know my dirty little secret, I’m not a nice person before I’ve had my coffee.
There’s nothing quite like that first cup of coffee in the morning.  A few sips of the aromatic magic stuff later and you’re suddenly awake and motivated to take the day head on.  It’s truly the best. 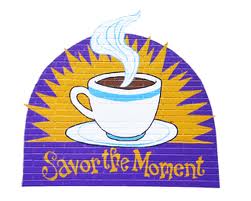 Everyone should believe in something.  I believe I will have another coffee.
Author Unknown
Posted by I'm mostly known as 'MA' at Tuesday, September 29, 2020

I'm sipping my good cup of coffee this morning, it's going to be a great day !

IT IS A girl THING. Sherry loves her morning coffee. She isn't quite as bad as you are. LOL ......I am the one who makes sure it is ready for the morning brew, the night before. I have forgotten once or twice. LOL
Thanks for the story of Hubby. I love it.
Be safe and sip that morning coffee.
Sherry and jack (PS: She is still sipping her coffee, it is in her hand as we sit here right now. LOL)

At least you are honest about it, Ma, LOL :) I think a lot of people are like you; they need that cup of coffee to get them going :) I think that's why the lines at Starbucks can be long some mornings :)

I am exactly the same way lol!

Chuckling at your 'confession' ... so cute! Have to admit, I'm more like your DDH -- but the pleasure that comes with my first cup of coffee can't be discounted.