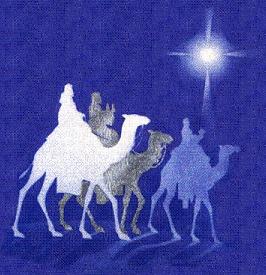 We three kings of Orient are;
bearing gifts we traverse afar,
field and fountain, moor and mountain,
following yonder star.

Born a King on Bethlehem's plain,
gold I bring to crown him again,
King forever, ceasing never,
over us all to reign.

Frankincense to offer have I;
incense owns a Deity nigh;
prayer and praising, voices raising,
worshiping God on high.

Myrrh is mine; its bitter perfume
breathes a life of gathering gloom;
sorrowing, sighing, bleeding, dying,
sealed in the stone cold tomb.
Refrain

Glorious now behold him arise;
King and God and sacrifice:
Alleluia, Alleluia,
sounds through the earth and skies.
Refrain

We Three Kings, also known as We Three Kings of Orient Are is a Christmas carol written by the Reverend John Henry Hopkins, Jr., who wrote both the lyrics and the music. It is suggested to have been written in 1857 but did not appear in print until his Carols, Hymns and Song in 1863. John Henry Hopkins, Jr., then an ordained deacon in the Episcopal Church and was instrumental in organizing an elaborate holiday pageant  for the students of the General Theological Seminary in New York City in 1857 while serving as the seminary's music director

The wisemen were all from different places and of different heritages.. They are a reminder that there is no difference between Jew and Greek, slave and free person, male and female.  All are welcome into the presence of the One who will reconcile everything. All things in heaven and on earth to Himself.

The Magi teach us the wisest of Advent lessons: There are many barriers to overcome and great distances to cover in our journey of Advent.  Remember:  Christmas comes for all.

Sweet entry. I love this song except the last verse. I was in a play once as the third king. I starte Myrrh is mine...... and forgot the words. Stood there saying da da da da.....

But everyone had a lot of fun with it after ward. For years I got Christmas cards saying Myrrh is mine da da da da da.

Merry Christmas you, and thanks for the reminder of fun Christmas times.....

I do like this song too. So true about the lessons the wisemen gave us to apply for Advent.

Lovely history with this song.