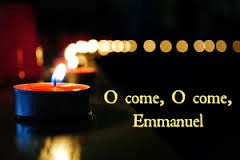 O Come Emmanuel carol was originally written in Latin text in the 12th Century. The author of the words and composer to the music of O Come, O Come Emmanuel is unknown. It is, however believed that the melody was of French origin and added to the text a hundred years later. The Latin was translated into English by John Mason Neale in 1851

Here we are the first Sunday of the season of Advent and so today and the next 3 weeks of Advent I’ll be sharing a carol or hymn as part of my preparation for the Christmas season. In our household, we tend to focus on the more joyful aspects of Advent, making it a time of festive cheer and happy expectation. As December 25 approaches, Christmas carols and decorations become more and more prevalent and they will continue to be a part of each day all the way until the season of Epiphany on January 6th.

Advent is the season of preparation for Christmas, not the celebration of it.  My family has long observed Advent so this week I spent some time unpacking and finding the Advent wreath and placed it on the table.  I unwrapped the  Advent candles and placed them in the wreath, all ready to light the first candle at lunch after church today.

This all brought to mind the hymn, O Come, O Come Emmanuel!   This is the Sunday of Expectation in which we begin to look forward to the Coming of the Messiah, the Incarnation of God by which he again revealed to the world that he is a  God with us.

O Come, O Come, Emmanuel. That is what Advent is about.

Before everything else, getting ready is the secret of success.

I hope you have a very BLESSED day!! Stay warm!!

We are looking forward to looking in and following along as the SPECIAL day approaches...

Preparing for something is MORE important than celebrating it.

I always liked that song O Come O Come Emanual. So glad we have this season to prepare our hearts for the Greatest Gift we ever got through Jesus :)