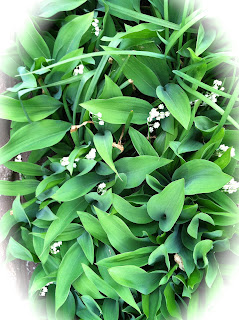 Lily of the valley has the flower meaning of humility, chastity, sweetness, purity and is said to bring luck in love. It also means the return of happiness which is the reason why it is often used as decorations in weddings.

Specially blended for sitting in the shade...

In the Victorian days, porches were generally meant to be used. Then came a phase around the 1940's when they became smaller and simply for show. A movement in architecture called New Urbanism is encouraging more city homes to be built with larger front porches again to aid in not just the enjoyment of nature, but the building of friendships between neighbors. Sitting on the porch in the evening can be a nice way to reflect back on the day.

All along the western side of my house I have Lily of the Valley plants growing and in late spring there is just nothing more heavenly than sitting on the porch and enjoying the heavenly scent and its white flowers are nice as the sun goes down.

Shade cools on a summer day and flowers add the fragrance of JOY.

I may be on the porch and in the shade today, but I'm walking on the sunny side of life...

I enjoy some of the fables that accompany plants. They make nice 'stories'. But the plants themselves are the miracles. Nothing like just seeing and enjoying His Creation.
Good read.
(HUGS)
We have a beautiful day coming up!

One of the things I love about your blog is how much I learn. Today was no exception. I can just imagine you sitting on your porch enjoying what you're looking at. When i was a kid we lived in a house that had a wraparound porch. I loved that most of all about the house. When it rained, and it could be pouring, we kids could still play jacks, chase each other, sit and color or read on that porch. We didn't have lilies of the valley but colorful geraniums- red ones that looked pretty against the light green house. Take care. Love you.

These flowers are so pretty. Didn't know the significance. It's wonderful you have a covered porch to enjoy them.

I love lilies of the valley flowers however they do take over a garden if you don't watch them carefully. They are such a simple flower yet so very pretty. It's been a beautiful day here. Love this time of the year. Hugs