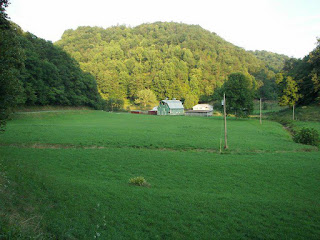 Yesterday I talked about my grandparents front porch and today I'm going to take you to the back porch.  The back porch was almost as long as the front porch but it was in the shape of an L.  Instead of a porch swing it had a long bench.  Along side the bench was the washer.  At the end of the L was the well.  The well was in use for most of my child hood.  They later on modernized things a bit and had a pump by the kitchen sink.

The well was quite a scary place when I was young.  We were well warned never to take chances and lean over in the well.  It had a crank handle that you'd turn to lower or raise a bucket in the well to draw water.  To this day I remember how good and cool and refreshing that water was.  They said it was spring fed and was pure as could be.  I don't think that well ever went dry.  When hot summer would leave other wells dry, my grand parents always had plenty.

The bench on the back porch wasn't for sitting and relaxing.  It was used mostly by Poppy, my grandfather, when he'd come in from his farm chores.  He'd sit down there to remove his boots.  Doing farm chores is plenty dirty, so he wore those boots faithfully.

The washer was an old fashioned wringer washer.  One summer I learned how to wash clothes in it and have been very thankful ever since for the invention of the modern washing machines.  First you'd have to fill the tub of the washer with hot water.  You'd heat the water on the kitchen stove and carry it out to porch and dump it in the washer.  Of course before you could heat it, you would have had to draw the water from the well.

After the tub was filled with hot water and I mean boiling hot water, you added the detergent and the 1st load of clothes.  The first being the white clothing like t-shirts, underwear and socks. The next load would be all the dishtowels, towels and table clothes, sheets, and pillow cases.  .  After that load would come a load of lighter colored things like dresses or shirts.  Finally the last load would be the dark clothing.  Usually this was my grandfathers pants and socks.

All of these loads were washed in the same tub of water.  It was used over and over.  Now after each load was put through the wringer, they'd go into a big tub of rinse water.  We'd use a large paddle like wooden stick to take the clothes out of the washer as they were still very hot. You'd use the same paddle to put the clothes through the wringer too so you're fingers wouldn't get caught.  The rinse water didn't have to be heated but it still had to be drawn from the well.  After things were thoroughly rinsed they'd have to be put through the wringer again and landed in a clothes basket to be hung out to dry on the clothes line right off the back porch.

I remember one time when I was feeling very proud of myself for having hung up the laundry when along came one of my aunts who asked me what on earth I thought I was doing.  She promptly informed me that you hung the pants by the ends of the legs and the shirts by their tales.  All that work had to be done over again.

After my grand parents died, the house was torn down.  But the farm and the barn is still there.

I remember doing wash like that....Monday was wash day and if it was raining, we hung clothes on a line. strung under the rafters of the porch...!!

That reminds me so much of my grandparents farm in Tennessee. I spent my summers there as a young child. By the time I was born my grandfather had already passed and my grandmother was paralyzed from a stroke, but all that stuff was still there and she told me all the stories of how things were done. They had 12 children to care for living in those old fashion ways. I can't even imagine!

After my grandmother died the property was sold, everything was torn down. It still makes me so sad.

What a rich history you have. I know what a chore those old wringer washers were because we had one even in the 60's.

Oh how I enjoyed that story. My grands had a back porch similar - but the rest - told me more about them too. sandie

This is so good, thanks. Love the things it brings to mind. Yes Wash day was a chore, but to a kid, seeing those wringers squeezing the water amazed me. I watched them like kids watch TV today.
Mama used bluing, I learned later it was some sort of a bleach for whites.
Thanks, great read....

I do remember how wringer washer! Was renting a flat up in Darwin way back when I was in my early to mid twenties. They had one of these and I just HATED it as everytime I tried to wind my sheets through they would start winding around the top part and hitting the lever to stop it wouldn't work so by the time I did get it to stop I had one big mess and would take me ages to unwind it as it was wound around so tight.
and put rubber diapers through that wringer diapers and explodes and I ruined a couple of shirts
And you had the clothes you déjas caught in the wringer? or ruined a couple of shirts?